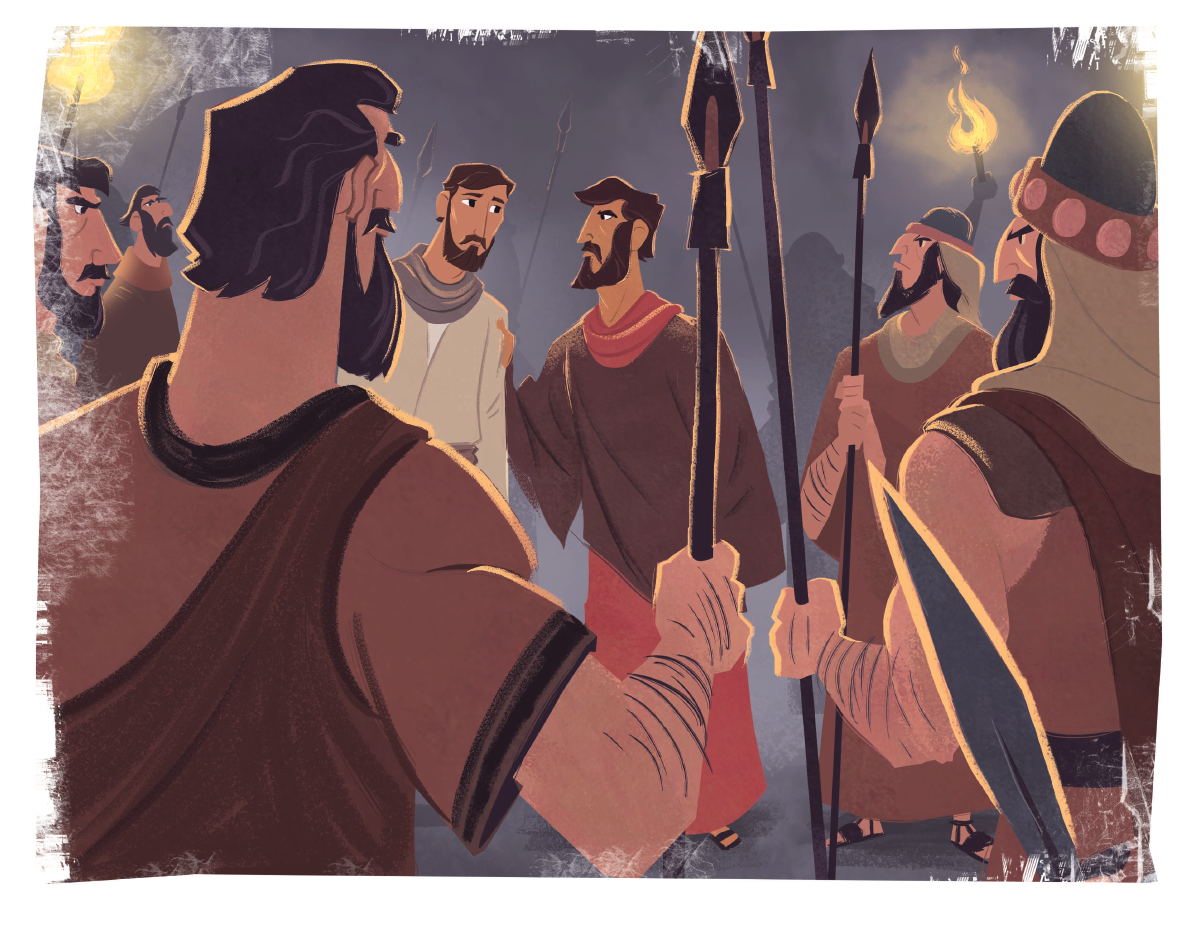 Jesus came with His disciples to a place called Gethsemane (geth SEM uh nih). He said to them, “Sit here while I go over there and pray.” Jesus became very sad and troubled. Jesus went a little farther. He fell face down and prayed, “Father! If it is possible, spare Me from this. But I want to do Your plan.” Jesus came back and found the disciples asleep. He asked Peter, “Couldn’t you stay awake with Me for one hour?” Jesus went away and prayed. Then He found His disciples sleeping again. He said, “Are you still asleep? Get up, for it is almost time. Someone is going to betray Me.” Suddenly Judas arrived. A large crowd carrying swords and clubs was with him. Judas kissed Jesus so the crowd would know who Jesus was. The men grabbed Jesus and arrested Him. Peter pulled out his sword and tried to fight the men, but Jesus told Peter to put away his sword. Jesus said, “Isn’t this what God planned all along?” Jesus’ followers ran away, but Peter stayed nearby to watch. The men who arrested Jesus led Him to the house of Caiaphas the high priest. The religious leaders were trying to find a reason to kill Jesus, but they could not. The high priest asked, “Do You have anything to say? Are You the Messiah, the Son of God?” Jesus replied, “Yes, that’s right.” The high priest said, “Ah ha! He has spoken against God.” Caiaphas and the religious leaders did not want to believe that Jesus is God’s Son. They said Jesus was lying, but Jesus was telling the truth! The crowd said, “He deserves to die!” They spit in Jesus’ face and hit Him. A servant saw Peter and asked, “Aren’t you one of Jesus’ disciples?” “No, I’m not!” Peter said. Twice more as Peter watched what was happening to Jesus, someone asked him if he was a follower of Jesus. Peter said no. The next morning, the religious leaders decided how they would kill Jesus. Then they took Him to Pilate, the governor.

Jesus knew that His death was God’s plan to save people from sin. Jesus’ friends turned against Him and He was arrested and put on trial, but Jesus followed His Father’s plan in order to bring salvation to the world. 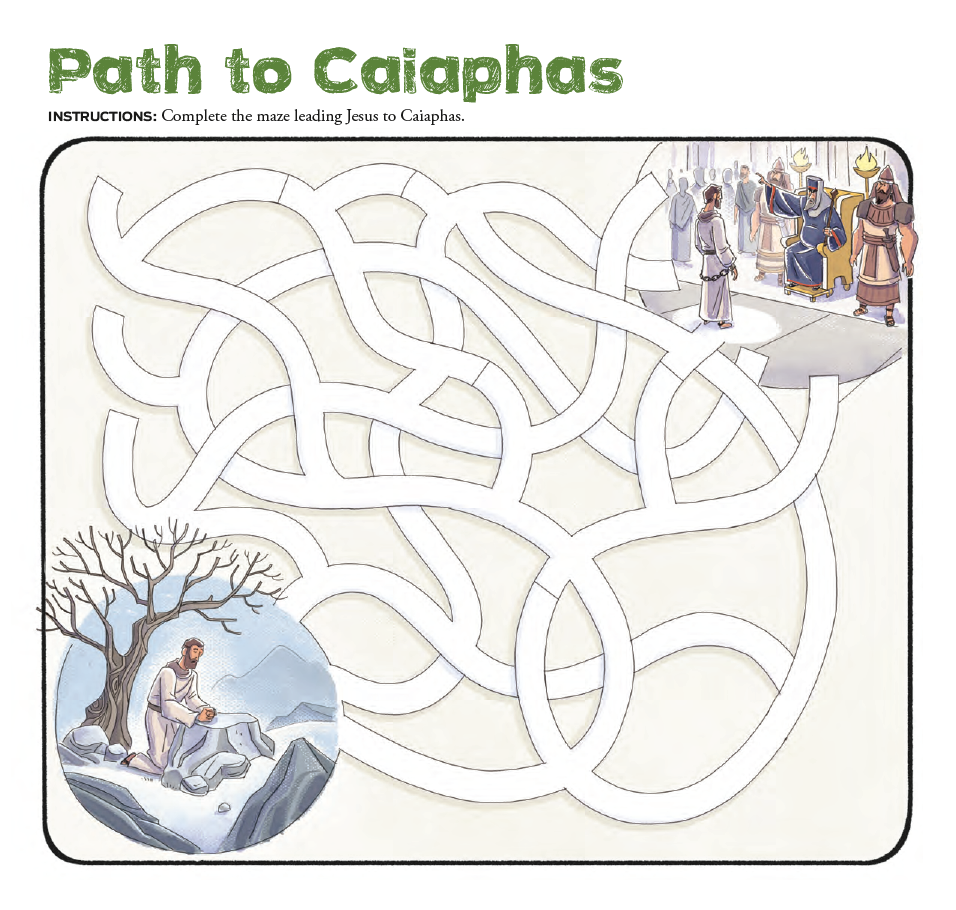 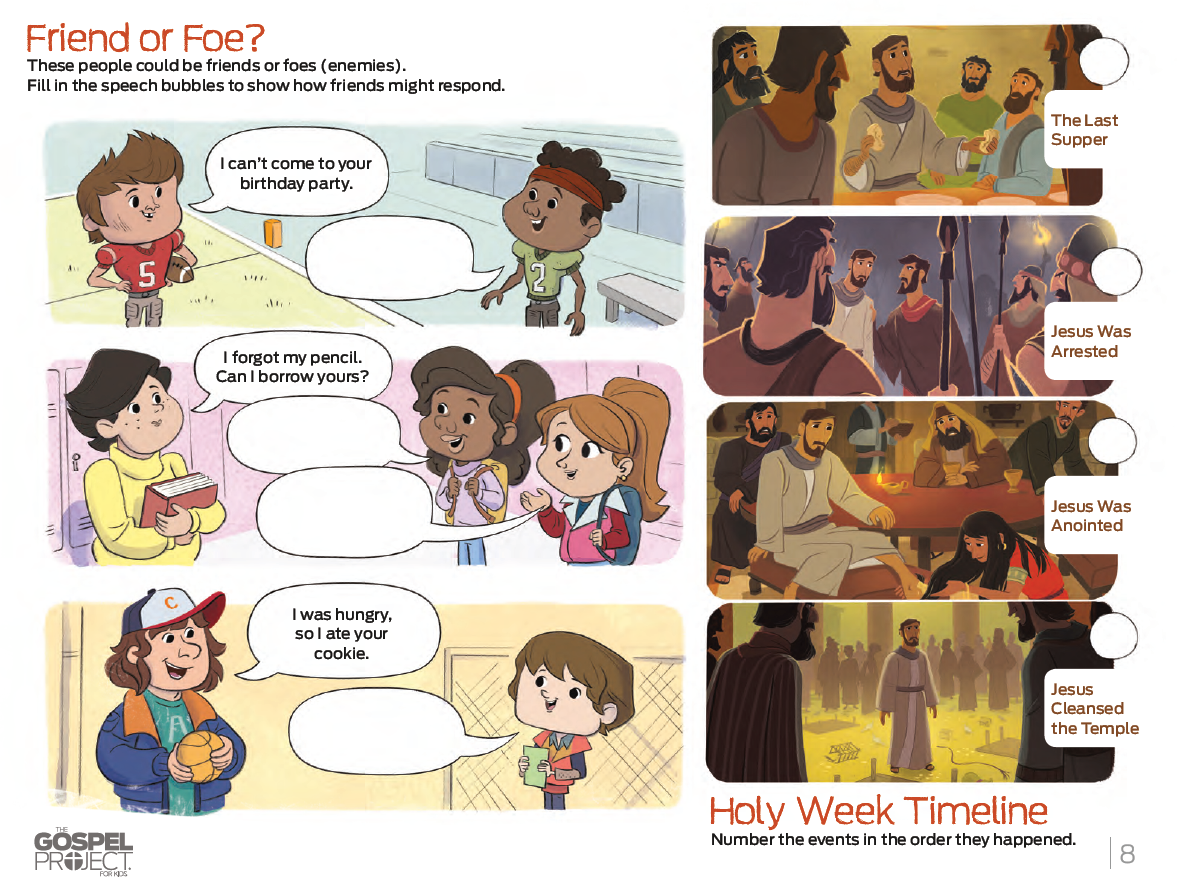 Family Activity Idea: Play a game like “Cops and Robbers” with your kids. Talk to them about how it feels to get caught doing something wrong. Remind them that Jesus never did anything wrong but was still arrested and sentenced to die.

God, thank You for sending Your Son to be betrayed by His friends, arrested for something He didn’t do, and killed on a cross to take away our sins. Thank You for Your amazing plan to rescue us from sin.
Amen